Time spent in laughter is the time spent with god. The noble mission of making god available en-masse is what comedians carry forth. Today, INFOSAURS is presenting for you a super talented and successful comedy content creator who has got all his funny stuff sorted. Hari Dubey is a comic social media presence who has tickled and ROFLed young and old alike and consistently so. Hence, we have undertaken a mission to get to what lies in the depths of one of the funniest minds around.

ORIGINS OF A SMILE - GROWING UP OF THE LAUGHTER

Happy-go-Lucky Hari Dubey was born on 08.09.2000 to father Ashok Kumar Dubey and mother Vimala Dubey in the quiet village of Boisar in the 'nuclear energy' city Tarapur near Mumbai. His interesting and enjoyable childhood was celebrated in Kaptanganj village in the Uttar Pradeshii city of Azamgarh. His fun days of growing up were shared with elder brothers Pankaj Kumar Dubey and Manoj Kumar Dubey. A smart and sharp student from childhood, Hari excelled in all the schools he attended, which were Ujjawal Sichan Sansthan - Kaptanganj and Bal Vidya Mandir Senior Secondary School - Lucknow. Then it was the turn for the drastic turns in his life which swayed him away from becoming a promising engineering student to becoming a hell of a comic content creator.

Hari with his Family

21-year-old Hari Dubey is a face full of positive vibes with an extraordinary ability to get everyone in splits! A pleasant oval face with a mischievous smile greets any onlooker. His dark and expressive black eyes exude sarcasm, fun, and jest. His black-brown hair is variously styled and the long hairstyle especially adds to his comic charm. Hari is lean and lanky. At 5'9", he weighs just 55 kg and does not shy away from using his lankiness to further his hilariousness.

Hari's journey from a small town lad to a comedy celebrity, although being a story of intense zeal, passion, and haltless hard work, is also nothing short of a fairy tale. After graduating from school (12th standard), Hari was comfortably placed with an engineering seat in UPTI and BSc opportunity in the prestigious BHU. However, his elder brother had a firm faith in his abilities and made him drop out in order to go for IIT JEE preparations. Acting and theatre had always excited Hari and the art itself almost came seeking this boy. He met the famous Actor Manoj Singh Tiger while he was returning from grocery-shopping and immediately, he pestered Manoj for an acting role. Amused, Manoj decided to take Hari with him to watch a theatrical drama ' Thoda Thoda Gandhi ' in Bharatendu Natak Academy.
This is where Hari was smitten by acting. Confident that he could even act way better than those on stage, it was now clear that acting was what he was born for. Deep nose-dived his interest in studies and he started bunking classes and clearly deteriorating. He was now a proud awardee of eggs in examinations. Hell broke loose when the elder brother thrashed Hari for his negligence of studies.

Deeply hurt and angered, Hari runs away from Lucknow to Varanasi. For gathering the necessary funds for his struggle to join theatre, he picked up many odd jobs, the first one being Freight loading and unloading. With a determination disproportionate to his skinny frame, he moved 40-kg parcels with ease. Soon, he had amassed the required Rs. 2500, however homesickness got the better of him and he returned back home to Lucknow. Here, there was an ambience of grief and sorrow and worries about his future. Parents were now willing to let their son do as he wished.

It was 21 May 2021 and it is now he started making YouTube videos in his channel The Bakwaas Talks, which now enjoyes over 80,000 followers. He gives almost all the credit for his success to his best friend. Significant credit for his success goes to some people in his life. Privendra Singh aka Pinkul Dada gave him his first break in a drama. He also supported and guided him constantly in the field of acting. Elder brother Pankaj Dubey looked after Hari like his own son since forever. He ensured a good education in a good school and always inspired Hari to become a good man. His mother has unwavering faith on her son and always told Hari to fearlessly follow his passion because he is grown enough to decide for the best. It was her who believed in him endlessly and motivated him.

His friend Kirti Singh was the one who ordered the tripod stand using which all his videos were shot. Yes, she also gave her cellphone for shooting all his videos. She was the one who encouraged him the most and saw the the potential in him that he can became an actor and she always supported him on this journey. In his own words, it was her and her alone who made a Hero out of Zero.
His life took a turn for good when a certain Pinkul dada finally heeded to his non-stop botherings for roles in drama. He went to Bhartendu Natak Academy where he kept getting minion roles in dramas. He was progressing but he was not satisfied being still-standing soldiers or characters of insignificance. Titular roles was what he aspired for. Meanwhile, Hari went to Chandigarh playing the of a simple soldier for the play 'Thoda Thoda Gandhi'. A significant encouragement came when he played the role of 'Jhabbu Kaka' in the play ' Mar Parajay', also in Chandigarh. He was energetically applauded for his small but powerful 2-minute role.

Later on the director clapped his back and personally praised his performance. And now, it was time for degree and qualification. This was a must if he wanted to pursue theatre. Angry and dejected, elder brother had clarified that not a single penny would be given for his crazy dream of acting.
Hari decided that Mass Communication is the course he would do and for monetary issues, he chose the cheapest available option. With just Rs. 3060 per year, Mahatma Gandhi Kashi Vidyapith University was the ideal choice for him.
He earned his well-deserved B.A. Hons. from this institute was ready to fly. Salim Arif sir is one person who encouraged him a lot and even got a few roles for him. He even took him to participate in a competition, where he unfortunately contracted Covid19. To sustain his life and dream, Hari worked in ITC company and also took odd jobs. He worked in a sari shop, did bookkeeping and also dragged sleepless nights working as a security guard.
Nothing worked the way he wanted and he finally came back home. With covid in full swing and corpses burning all around and depressing news hung heavy in air, there was not much to be cheerful for.

Hari took refuge in Instagram reels. He was particularly inspired by a character Saad Lucknowi after which he also launched his own version Babban Lucknowi and created a few reels. His very first post was about Covid. Unfortunately, his overenthusiastic friends over-encouraged Hari pushing him into a blissful fool's paradise, adversely hitting his video quality. Initial videos garnered an average response.

It is now that he decides to revamp, removes his unsuccessful channel, and launches afresh the channel 'The Bakwaas Talks'. Poonam Se Breakup was his first video. It became quite popular. It was shared by 'Saad bhaiyya' and even liked by TVF team members like Abhinav Anand. It was after this that TVF fame Rashika Pradhan started following him. Another video, 'Ganjedi dost' which was uploaded in just 1-2 takes, hurriedly got immense fame. It was shared in many pages and received over 10 million FB views. But, his true breakthrough came with his funny video 'Kheera Prasad', which was his first viral video. Soon, he got featured in the Adultgram page which boomed his Insta following like anything. A famous choreographer Aisha reposted his video as her story which really rocketed his follower's number. He is also now followed by DID fame Raghav Juyal. Currently, Hari's Instagram follow-list boasts a breathtaking 588k+! And that is how his journey keeps racing towards greater and greater success. More power to Hari!

Hari is fondly called Om by his friends and family. Being an actor and content creator - actors are the source of his fire! Irrfan Khan, Vijay Raaz,  Nawazuddin Siddiqui, Pankaj Tripathi and Johnny Depp, Rajpal Yadav, and the great Rekha jii are his favorites. Movies are the prime motivators and entertainers for him. The lunch box, Salam Bombay, Life in a Metro, and Slum Dog Millionaire are deeply loved by him. Firmly rooted to his modest origins, Hari is a proud lover of the plain old Dal Chawal! Black and white are his favorite colors. T.V. shows of his choice include Family Man, Gullak, and Sex education. His love for his origins is infinite and he wants to live just along the various Ghaats of Benaras. Apart from acting and comedy, Hari enjoys singing and dancing. His good habit is also his weakness - being quick in trusting everyone. Hari is a good sanskaarii guy and has no relation whatsoever with smoking or alcohol. One sweet thing about Hari is his interest in talking to new people and conversing with old people and listening to them carefully. Being a comic entertainer, obviously his childhood is full of naughty memories. When he was barely 7, this funny boy had gone and proposed his English teacher! That is pretty much all we have got.

Almost a rags-to-riches story INFOSAURS pursues
When a small-town simpleton, is now worth million views
Meet Hari Dubey - a comedy content creator insane
Tickling innumerable funny bones - healing innumerable pains
With senseless ticklings - His channel makes you laugh
'The Bakwaas Talks' is truly a miracle of art
From mundane daily topics, genius content he makes
In a dizzying delight trip - everyone which takes
Witty, wise and smart - Hari is a crafty crafter
May he keep amusing - and offering endless laughter
May his profiles keep booming - Forever and even after
May he keep amusing - and offering endless laughter 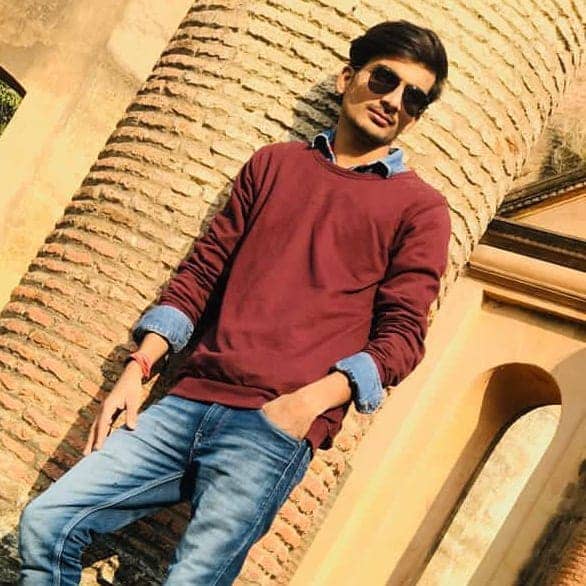